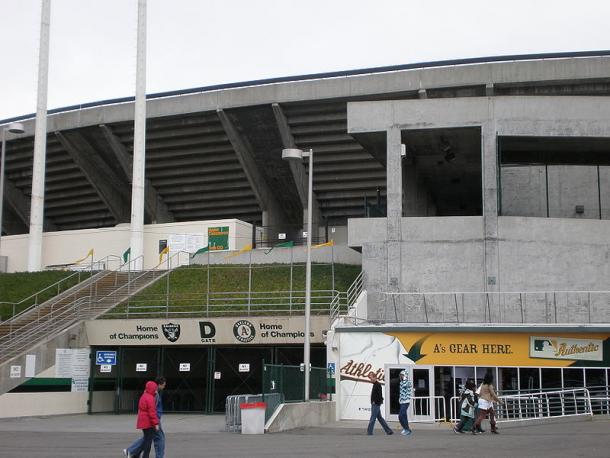 Officials Clash Over Proposal to Tear Down Oakland-Alameda County Coliseum

A recent memo to Mayor Jean Quan revealed that the Oakland Raiders are in talks to tear down their current stadium—the Oakland-Alameda County Coliseum—to make way for a new arena for the NFL team.

Members of the Oakland-Alameda County Coliseum Authority were shocked. Especially considering that the agency recently reached an agreement to keep the Oakland A’s in the Coliseum for 10 more years.

Planners of the city-backed Coliseum City—a sports-retail project—are planning to make a deal with the Raiders by the end of the summer that would lead to a brand new football stadium being built on the existing Coliseum site by 2018. Which would mean the Coliseum would be demolished by 2015.

Alameda County Supervisor and Coliseum Authority Chairman Nate Miley called the proposal “total preposterous.” The county still owes $180 million on the stadium, Miley revealed, due to a tax-funded makeover for the arena in the mid-1990s.

"This is either smoke and mirrors, or they are on crack,” Miley said.

Reid, however, did go on to explain that while Mayor Quan and the city council has given their blessing to the Coliseum City group, the Coliseum Authority actually controls the stadium and has given no such endorsement to their actions.

Due to many unanswered questions about this unexpected proposal, many in Alameda County are wondering if the proposal is even intended to be carried out as planned, or if it really is just “smoke and mirrors.”

The team Vice President for the A’s, Ken Pries, said that from the position of a fellow Oakland team, they do not think the Raiders project is going to happen. However, if it is real, the A’s have previously signed an agreement to leave the Coliseum on two years’ notice if the Raiders put a $10 million deposit down on a new stadium.

Read more about the Coliseum here.