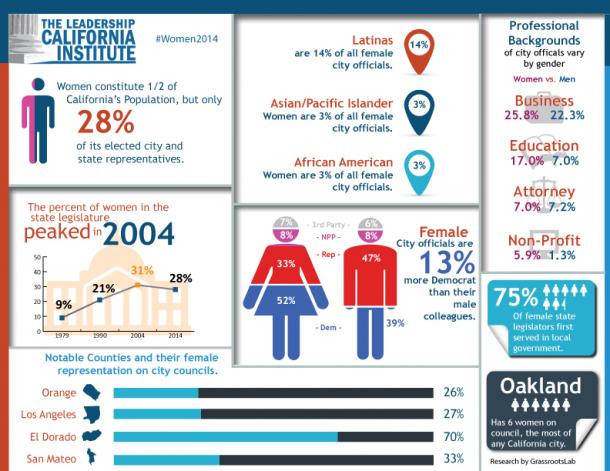 "The lack of political representation for women in the legislature and in large cities in California is well known. Until now, however, there has been very little data to reveal the bigger picture on the true status of women in government," said Paula Treat, President of the Leadership California Institute, "The LCI is proud to release this report and believes its findings will provide critical insight into the pathways taken by women successfully elected to public office, and prove instrumental in efforts to build a pipeline of female leadership in California."

By assessing the geographic, political and demographic profiles of sitting female public officials, Women 2014 asks:  If improving women’s participation in elected government is a desired outcome, what role do women serving at the local government level play in efforts to build an effective and robust pipeline of future female leaders? What does the profile of a successful female candidate look like and what does it tell us about our political institutions?

Women 2014 explores the professional, ethnic and partisan profiles of women and men in local office. The report finds that Business is the most common professional background for women and men holding local office. It also finds female city officials nearly 20 percent more likely to be Democrats than Republicans. At the county level, the margin is 11 percentage points.

The report also explores the striking lack of representation for Hispanic, African American and Asian Pacific Islander Women. Just 14 percent of female city officials are Latina, and African American and API women comprise just 3 percent each of the female mayors and council members across the state.
"Women in California have come a very long way but a lot work remains if we are to successfully close the political gender gap," said Assemblywoman Bonnie Lowenthal, Chair of the Legislative Women's Caucus.  "By providing us with important information—such as who our female leaders are and where they come from, the Leadership California Institute's report on the status of women in California local government helps us get one step closer to that goal and better equips us as we continue to work at increasing the number of women serving in government."

While the report finds that women comprise less than 30% of all state, city and county officials, the report also finds that on a more granular level, political representation of women is best characterized by a series of “peaks” and “valleys,” with strong female representation on some county and city councils, and others where women are nearly or entirely absent.
"Focusing on improving the number of women in California local government is critical," said Assemblywoman Connie Conway." As the first level of government, California’s counties, cities and schools are not only a natural entry point for women interested in pursuing public office but also a “bench” of female leaders for higher office. In this aspect, the Leadership California Institute’s report on the status of women in local government is the first of its kind."

The LCI offers the findings in Women 2014 as a baseline by which future progress of women in California government can be measured. In the interim, the LCI will be hosting regional forums throughout the state on the status of women.

To view the report, visit the Leadership California Institute, here.