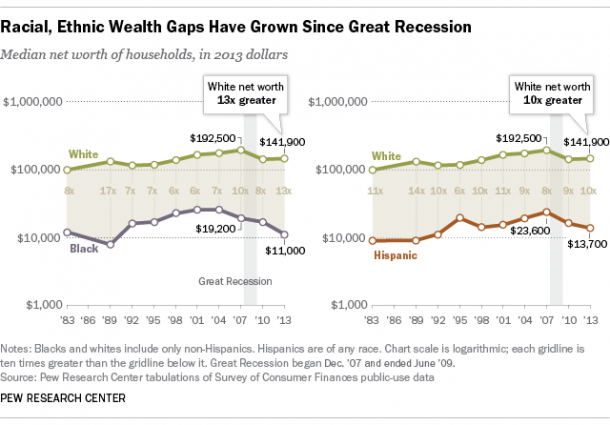 As American policy makers begin to focus on growing income inequality, both in California and across the country, the wealth gap has widened along racial and ethnic lines since the Great Recession, according to a  new study from the Pew Research Center.

The gaps between whites and blacks, as well as whites and Latinos, are the largest they have been in decades. The current gap between blacks and whites has reached its highest point since 1989, when whites had 17 times the wealth of black households. The current white-to-Hispanic wealth ratio is greater than any time since 2001.

Yet, wealth inequality is greater in the United States than at any time since the Great Depression. That means the growing gaps between haves and have-nots is also a story of growing income gaps between whites on one hand, and Blacks and Latinos on the other. The trend is particularly alarming in California, where Latinos now make up a plurality of the state’s 38 million residents, and will constitute a majority by 2050, according to estimates from the state Department of Finance.

The Pew Center’s findings are based on data from the Federal Reserve’s Survey of Consumer Finances. You can find the entire study online here.