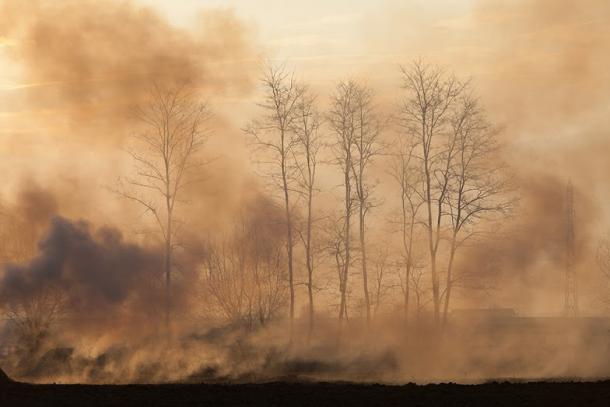 One of the drones was sighted Wednesday around 5:30 p.m. flying 800 to 900 feet above ground. A second drone was later spotted at around 1,200 feet above ground. According to Mike Eaton, forest aviation officer for the San Bernardino National Forest, drones are not permitted to surpass 400 feet.

Authorities quickly diverted The DC-10 which was dropping retardant along the Nevada border, while two smaller planes were also called off. The failed mission cost between $10,000 and $15,000 and resulted in further fire damage to the area.

By Thursday morning, the fire had consumed 23,199 acres.

“The fire certainly grew because we weren't able to drop the retardant,” according to Eaton. “We had to shut down subsequent missions that could have possibly contained the fire.” The incident also placed the pilots in potential peril, he added.

Authorities have not yet identified the drones that interrupted Wednesday’s firefighting efforts. They have been described as fixed-wing drones with a wingspan of 4 feet that are either red or orange in color. In the meantime, authorities are reminding the public that flying drones in restricted airspace around a fire is both dangerous and illegal. “If You Fly, We Can’t,” read several flyers posted around a fire map at the San Bernardino Airtanker Base.

This is not the first time that government agencies have had run-ins with unmanned civilian aircraft. In July 2014, authorities had to confront a drone operator near Plymouth in Northern California after his aircraft approached a 3,800-acre fire that crews were attempting to contain. The U.S. Forest Service also issued a statement last year on civilian drone use and its potential to interfere with firefighting efforts.