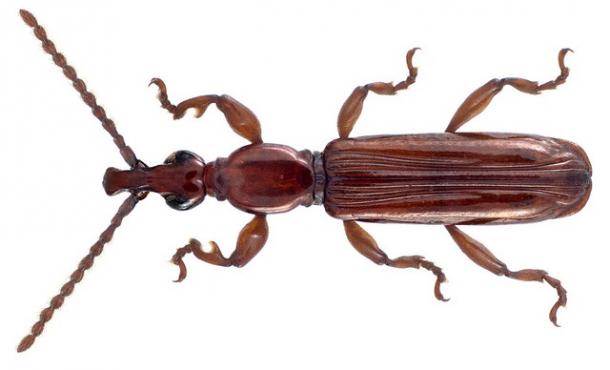 Could a six-legged pest be really be responsible for the devastation wrought by Northern California’s Valley Fire? Well, sort of, the experts say.

Tom Smith, a park pest management specialist with the California Department of Forestry and Fire Protection, spoke to the Los Angeles Times this week about the role the dastardly bark beetle has played in the recent Lake County fire. The blaze, which has already grown to more than 60,000 acres, was surely exacerbated by the insect’s proliferation, he said.

"This last couple years has just been so extreme that everything's under stress,” said Smith. "If we weren't in the drought, we wouldn't have so much bark beetle."

And if there wasn’t so much bark beetle, there wouldn’t be so much fuel for the fire. That’s because the beetles contribute to the necrosis of trees, providing the perfect environment for a wildfire’s spread. Conversely, the fires also make the beetle’s proliferation more likely because of the transformative effect they have on the trees’ conifers.

“There’s no doubt that’s going to enhance a fire,” he said.

Because of the drought, the presence of California’s bark beetles has reached epidemic proportions. Unless and until an El Nino arrives, the future looks bleak, according to Smith.

Read more about the role of the bark beetle in the Lake County fire here.