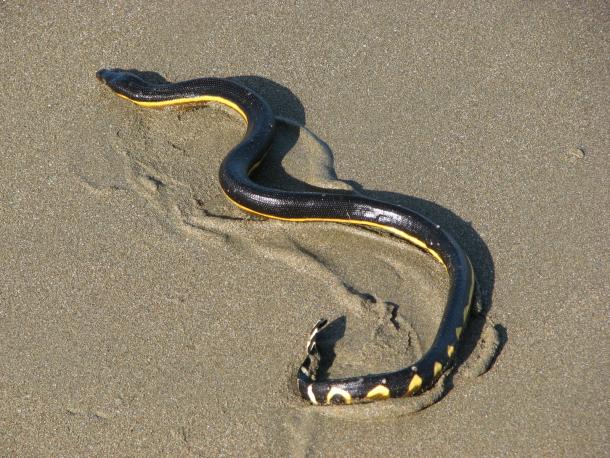 This is the way world ends, not with a drought, but snakes.

T.S. Elliot references aside, the yellow-bellied sea snake has been found on the shore of Ventura County’s Silver Strand Beach this past Friday.

Experts say the warmer El Nino waters are allowing them to travel farther north from their normal, more tropical climate.

The snake itself is highly venomous, prompting experts to urge beachgoers to keep at a distance but still document the sighting.

Experts also added the last time the snake was documented this far north was during 1983, also an El Nino year.

Yellow-bellied sea snakes do not normally come ashore as their bodies are not well suited for travel on land, the one found in Ventura died shortly after being taken to the local U.S. Fish and Wildlife Service office.

More on the looming invasion of the sea snakes is available here.

By Aloaiza (Own work) [GFDL (http://www.gnu.org/copyleft/fdl.html) or CC BY 3.0 (http://creativecommons.org/licenses/by/3.0)], via Wikimedia Commons