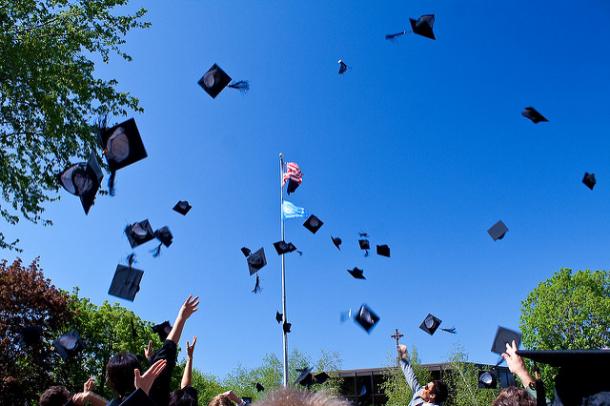 There are going to be a lot of proud moms and dads this graduation season.

According to new figures from the California Department of Education, the state's high school graduation rate is up for the sixth year in a row, having reached an all-time high of 82.3 percent in 2015. A total of 401,957 students walked the stage last year, with the largest gains among some of the most historically vulnerable groups like English learners, dropouts, African Americans and Latinos. Even more are expected to do so this year.

“This is encouraging news any way you look at it,” said California State Superintendent of Public Instruction Tom Torlakson, "especially since the increase is occurring as we are introducing much more rigorous academic standards." He attributed the progress to an increase in revenue, but the suspension of a controversial exit exam last year could also account for some of the recent improvements, state officials said.

Nevertheless, the data shows a persisting achievement gap among white, black and Hispanic students overall. Some of the credit recovery programs that aim to help students graduate on time are also less rigorous, said Russell Rumberger of the California Dropout Research Project at U.C. Santa Barbara. For that reason, officials would be wise to remain cautiously optimistic.