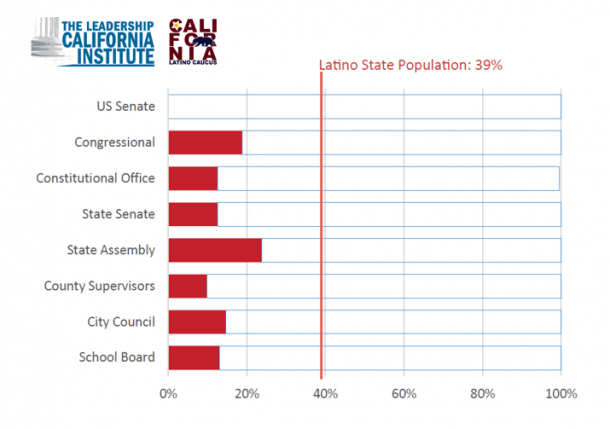 A report by the Leadership California Institute and the Legislative Latino Caucus shows that while the Latino population in the state is 39 percent, only 10 percent of county supervisors and less than 15 percent of city council members are Latino.

The report, The Politics of Prosperity: A Look into California’s Latino Representation Challenge, was compiled with informaiton from the National Association of Latino Elected and Appointed Officials (NALEO) and is based off data ending January 2015. It encompasses six key factors affecting Latinos: poverty, unemployment, home ownership, high school dropout rate, registered voter turnout, and elected official representation at county, city, and school levels.

Of the 30 Latino County Supervisors, only 6 are female. Of the 9 counties with a Latino majority population in California, only Fresno has an elected Latino representation close to its population. The counties that rank highest overall are Ventura, Contra Costa and San Mateo.

Mono County ranks at the top for highest voter turnout and lowest poverty rate, and ties with Inyo County for having the lowest unemployment rate. But takes the bottom seats in home ownership, elected representation, and high school dropout rate, putting the county at 21 overall.

Read the full report and see where your county ranks here.