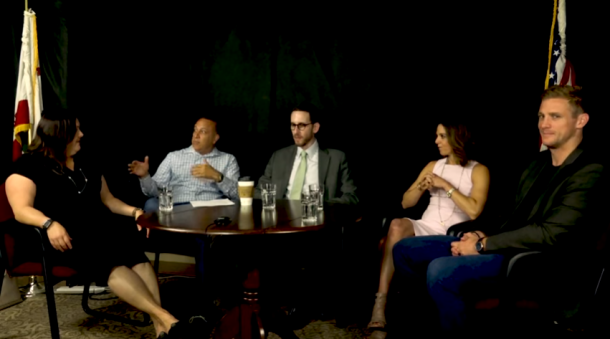 “Behind the Bill” Sits Down With Sen. Scott Wiener in Episode 2

Redevelopment and “the naked guys” were both subjects broached in the second episode of the Behind the Bill podcast featuring State Sen. Scott Wiener last week.

The panel — Mike Madrid, Kim Craig, Amy Brown, and Colin Hawley — had a chance to ask Sen. Wiener about his transit-housing bill, SB 50. The bill, which would have virtually eliminated single-family zoning in many parts of the state, was arguably the most important legislation of the session before it went down in defeat in May. But perhaps defeat is the wrong word because Sen. Wiener assures us that his bill is very much alive and well.

Some spoilers from this highly informative yet entertaining episode:

As a former local official himself, Wiener says he’s sympathetic to the opposition his bill faced from cities. Local authority is a good thing but he believes it has failed when it comes to the state’s affordable housing crisis.

But what about the state’s role? Wiener was asked about CEQA reform and redevelopment, which he says he’d favor bringing back in some form. As Mike points out, the elimination of redevelopment 8 years ago meant the loss of $1 billion in affordable housing funds each year.

The senator also had a chance to discuss some other legislation he’s working on while Amy chowed down on a plate full of —ahem— wieners. That’s when the podcast took a bit of an unexpected turn.