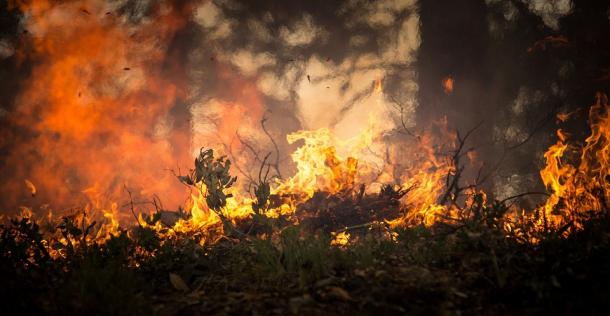 California: On Fire and in the Dark

More than 200,000 California residents have been evacuated and another 2 million are without power in what has become another vicious fire season and Gavin Newsom’s biggest test as governor.

“This is the largest evacuation that any of us at the Sheriff's Office can remember. Take care of each other," the Sonoma County Sheriff’s Office tweeted of the Kincade Fire Sunday.

Evacuation efforts have been hampered by massive preventative blackouts undertaken by energy supplier PG&E. The outages have affected and enraged millions, already placing the governor’s legacy in peril.

The blackouts have also limited some municipalities’ access to well water. As a result, the City of Vallejo has declared a water emergency.

A “severe wind event” is expected Tuesday and Wednesday across 32 counties in Northern and Central California. That could mean even more blackouts to come.

In Southern California, residents are just returning home from one fire as another new one burns. The Tick Fire in Canyon Country burned over 4,500 acres before evacuation orders were lifted. But Sunday night, another blaze erupted near the Los Angeles Getty Center.

From the Los Angeles Times:

The fire broke out along the 405 Freeway near the Getty Center and was spreading to the south and west. The mandatory evacuation zone was described by fire officials as a box: Mulholland Drive on the north side, the 405 on the east, Sunset Boulevard on the south and Mandeville Canyon Road on the west.

Mount St. Mary’s University was surrounded by flames and a campus spokeswoman said all 450 students have been safely evacuate to the schools Doheny campus near downtown.

The fire has burned more than 250 acres and 3,300 homes were under mandatory evacuation. Los Angeles Fire Department Capt. Erik Scott said officials were most concerned about Mandeville Canyon, the Brentwood area around Bundy Drive and Mountaingate.

Governor Gavin Newsom has declared a state of emergency across California.

It’s dry and hot in California. Here’s how to prepare for the next wildfire.